In the Shadow of the Acropolis 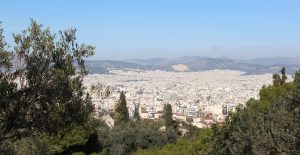 Our Grecian adventure began and ended in Athens.

This February, my friend, Suki, and I spent a week traveling on a bus with 20 other tourists exploring the diversity and history of this amazing country and its delightful people. The best time to visit Greece is in the off-season. The price is right, the winter weather is mild and the ancient ruins, one of the many attractions of the country, are practically deserted. Almost everyone on the trip was a seasoned traveler. Some were returning to Greece for a second time and a few were staying in the country or traveling to other destinations after the tour.

Surrounded by mountains on three sides and the Aegean Sea on the fourth, almost 4,000,000 people live within 165 square miles of Athens. That’s about 44,000 folks per square mile. You won’t find any quaint homes with yards surrounded by picket fences here. Six and seven-story apartment buildings line the streets congested with cars, some moving bumper to bumper at a snail’s pace and others parked helter-skelter on the sidewalks and curbs for lack of space. Being a country girl, I couldn’t wait to get out of the noisy city.

Our gentle Greek guide, Matina, introduced us to charming towns on the coasts of the Aegean Sea. She also took us to quiet villages with narrow streets nestled in the snow-capped mountains that meandered through the country. We stepped back into time in 3400-year-old ruins that have only been discovered in the last couple of centuries. We gazed in awe at marble columns that had silently slept under thousands of years of accumulated dirt and plant growth waiting to be awakened like Sleeping Beauty. 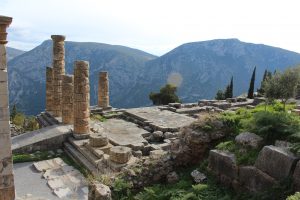 Following in the footsteps of our 5th-century ancestors on their religious pilgrimages, we too traveled long distances to see the famous sites in Greece. In the windy mountains of Delphi, we climbed the timeworn steps snaking up to the shrine to Apollo. Occasionally we stopped along the serpentine path for Matina to point out some inscription carved in the marble blocks that only she could read. Twenty-five hundred years ago pilgrims brought offerings to this remote temple to seek a word of wisdom from the great Oracle of Delphi. The Oracle, a young teenage girl, was chosen from a nearby village. She sat in a cave under the temple breathing volcanic fumes, chewing oleander leaves and ambiguously answered their questions. (No wonder she replaced every four years.)

In Olympia, we “oohed” and “ahhed” at the stone ruins of the expansive training facilities for those dedicated athletes of long ago. Our group paused with Matina at the base of the temple to Zeus, where only three columns remain standing showing visitors the enormity of the monument. She explained that the renowned sanctuary once housed a 43-foot high ivory and gold statue of Zeus—one of the Seven Wonders of the Ancient World. We took pictures of one another standing next to six-foot wide toppled pillars scattered around the sanctuary like pick-up sticks. 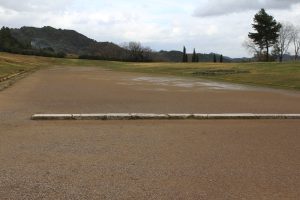 With the exception of one arch, the tunneled entrance to the stadium reserved for the athletes was gone. As we entered, we could imagine 45,000 Greek men sitting on the grassy surrounding slopes with their food and drink cheering on their hometown heroes (much like today’s Super Bowl fans). Like the tourists we were, for fun Suki and I posed on the marble starting line inside the 600-foot stadium. 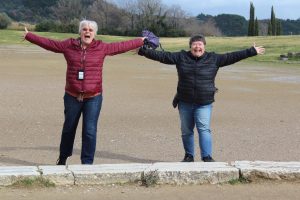 As famous as the ruins, Greece, and specifically Athens, is known as the birthplace of western civilization. Over 500 years before Christ was born, Athens was giving birth to democracy, theater, philosophy, scientific study, medicine, and the Olympics. Athens is also home to Alexander the Great who pushed his armies south to conquer Persia, Egypt, and Asia spreading his culture and language throughout the known world. In the golden age of Socrates, Plato, and Aristotle, Greeks worshipped over 20 major and minor mythological gods made in the image of man. 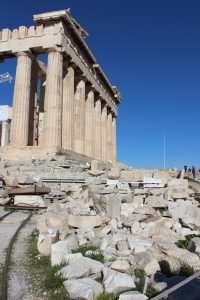 The Parthenon, temple to the goddess Athena, is the crown jewel of Athens. Built in the 5th century BC during the rule of Pericles, it sits atop a hill 500 feet above sea level. With ancient eyes, it overlooks the evolution of its namesake and anchors Athenians to their awkward heritage that struggles to blend both the ancient and the modern.

My small tour group and I climbed the 80 or more uneven slippery marble steps of the Acropolis where the Parthenon reigns like a queen on her throne. With the clamoring of the sprawling city lost below the trees, the ruins of the columned temple rose proudly behind me as Matina pointed to a small hill in the shadow of the Acropolis. “That is Mars Hill,” she said. “It’s the place where the Apostle Paul introduced Christianity to Athens. The hill doesn’t look the same as it did in Paul’s day. It suffered damage in 1687 by Venetian cannon fire during the war with the Turks.”

As I focused on the humble, inconspicuous mount, our knowledgeable guide continued, “In 51 AD, Paul stood on this hill and said, ‘People of Athens! I see that in every way you are very religious. For as I walked around and looked carefully at your objects of worship, I even found an altar with this inscription: to an unknown god.’” 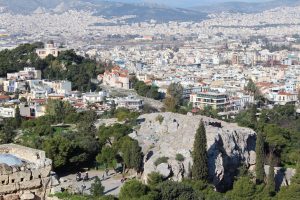 Matina turned and our group continued climbing to the top of the Acropolis, but I lingered a moment to absorb the significance of what I was seeing. I aimed my camera and zoomed in to see one lone tourist standing atop the rock, much like Paul once did.

In the Roman world during the first century, God chose the perfect person to spread the gospel outside Judea: the Apostle Paul. A Greek-speaking Jew and a Roman citizen, he understood the eternal life-changing significance of Jesus’ death and resurrection. Paul was well-educated and well-acquainted with the cultures of the world. He had traveled from Thessalonica to Athens and seen the elaborate temples and shrines in both cities.

Speaking from this modist hill to Athenians over 2000 years ago and looking up at the colorful, gilded elegant shrine to Athena shimmering in the sun, Paul spoke clearly. “You are ignorant of the very thing you worship…The God who made the world and everything in it is the Lord of heaven and earth and does not live in temples built by human hands. And he is not served by human hands, as if he needed anything. Rather, he himself gives everyone life and breath and everything else. From one man he made all the nations, that they should inhabit the whole earth; and he marked out their appointed times in history and the boundaries of their lands. God did this so that they would seek him and perhaps reach out for him and find him…” (Acts 17:22-27)

On our tour, we saw the remains of once-ornate pagan temples throughout the country. The Greeks had invested hundreds of years and the wealth of their communities to build marble shrines that lie in ruins today. These scattered stagnant stones are a tangible reminder of the futility of putting our trust in the things of this world. 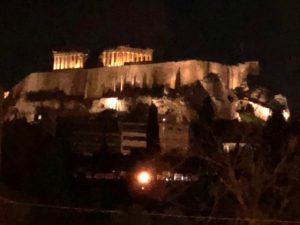 The Acropolis at Night

As I look back at that day on the Acropolis, I can’t help but compare the elaborate edifice of the Parthenon to the humble hill in its shadow. I ask myself how often have I invested my time, energy and resources in fleeting temples? If I were to number the priorities in my life, would Jesus be first on the list?

It’s easy to get distracted with the cares of this world: jobs, family, health, finances, houses, sports, the latest ‘toys.’ Making those things our number one priority can create distractions that become idols which over time will consume us. Like the broken columns on the ground in Greece, one by one those icons will fall, leaving us unsteady and unsure of our future.

Will our “temples” lie in ruins one day like the ancient sites in Greece? Or will our legacy be a testimony of the goodness of the One who is Eternal?

It’s something to think about.