The Absurdity of Christmas 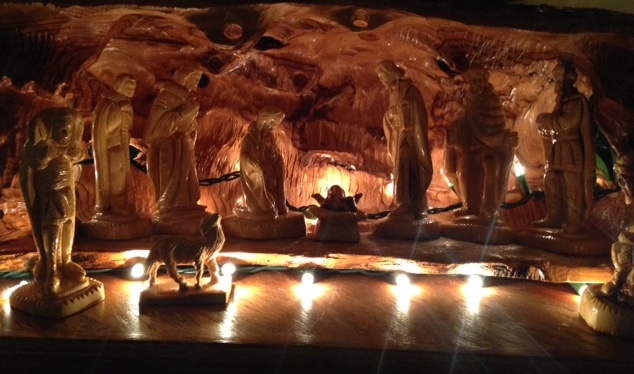 Have you ever thought about how “wrong” Christmas is?

Many of us have read the story of Jesus’ birth in Matthew or Luke. And most of us have seen nativity sets in homes, on lawns or in stores–a statuesque display of wise men and shepherds gathered in a stable around a simple man and woman looking down on baby Jesus. The images have become so familiar we sometimes forget the enormity and absurdity of what we’re seeing.

For over 500 years Israel had been looking for the long-awaited Messiah–the Anointed One of God–to set them free. Israel was looking for a warrior-king who would bring back the glory days of Solomon. Perhaps they were looking for another Joseph–a man of influence who became Pharaoh’s second-in-command who saved them from famine. Or maybe they anticipated a comparable Moses–a child raised and educated in the gilded grandeur of a palace who led them out of slavery. It’s possible they sought after a second David–a shepherd-turned-king hero who destroyed Israel’s enemies and expanded her borders.

Think about their history with God and how specific He was when He instructed the Israelites to built the tabernacle and, later, the temple. Measurements had to be exact, only the best fabrics were used. and the purest refined gold covered all the objects in the Holy of Holies. Priests were required to wear specific outfits (no jeans in this church) and even the incense was made to a specific formula before God would dwell there. Surely His coming King would appear on the scene with supernatural splendor.

And what about God? Wouldn’t He would want His Son to have all the luxury and pampering possible? After all, even humans want the best for their children. Surely King Jesus would be born to a royal family in a palace. Imagine the platform and influence the Messiah could have on the world. Even as a young prince He would have authority, and could reconquer the world as Alexander the Great had.

And wouldn’t God’s Son be born in an important city with tremendous fanfare and trumpets, much like the pomp and pageantry at the birth of Prince Charles in London, England? Surely, God would use everything at His disposal to commemorate the birth of His Son. After all, in a city like London–or Rome–Jesus would have instant access to thousands .

But it didn’t happen that way.

God napping when Jesus came on the scene?

Bethlehem was a tiny village of about 300 people situated about six miles from Jerusalem. Its claim to fame was it was the birthplace of Israel’s most beloved ruler, King David. But hundreds of years had passed since that event and Bethlehem had slowly shrunk in importance until it was simply another tiny dot on the map of notable places.

And if Bethlehem wasn’t obscure enough, what about the stable? In those days, stables weren’t the nice cozy barns we see as we drive through the country. They were often converted caves–damp and rock-hard. Mangers, the feeding troughs, were typically hollowed out stones. Because of poor air circulation the cave’s musty smell mingled with the stench of animals–and their left-overs. It was cold. It was dark. And it stank! This couldn’t have been a place God would choose for the birth of His Son. Surely, Mary and Joseph made a mistake.

And, speaking of Mary and Joseph– a carpenter (some include stonemasonry in the craft) and a young girl barely in her teens–both from a nowhere village called Nazareth. Joseph would never make it to the the elite status of architect or designer. He may have done a little work on the pyramids during their flight to Egypt, but you won’t find any commemorative cornerstones that read, “Built by Joe” on any of them. In fact his name isn’t recorded anywhere at all, except the Bible. Neither is Mary’s. Why would God use two “nobodies” as Jesus’ parents?

Well, you might say, at least the angels were present. But that’s not quite true either. On that famous night there was no celebratory music in the background–no choir of angels singing from above. They had already come and gone after appearing to the shepherds in the fields–not to Mary and Joseph in the stable.

Dirty shepherds in wrinkled smokey-smelling clothes from camping out in the fields were the only audience that night. The “wise men” with their gifts weren’t even there yet. They arrived later.

What was God thinking?