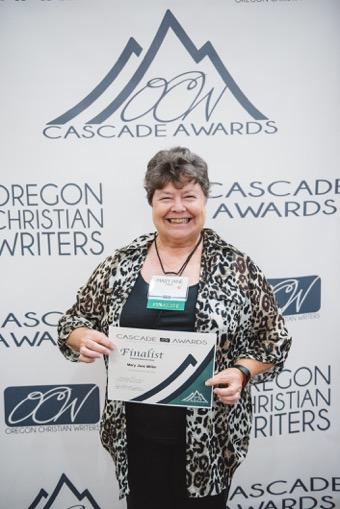 I’ve been to a few conferences in my time and they can be overwhelming with lots of people, new information, break-out sessions and not-so-homey accommodations. It’s the Best of Times and the Worst of Times — not because conferences are bad, but because it’s easy to get overloaded with more information than your brain can absorb in a few days. Like eating Thanksgiving dinner, you’re inspired and stuffed with good things, but too full to actually do anything for a while.

Suki and I just returned from a road trip to the Oregon Christian Writers Conference (OCW) in Portland, Oregon. The three-week driving trip out and back was intimidating enough, not to mention the idea of “hobnobbing” with elite Christian publishers, editors, agents and writers from all over the country.

My book, Life Lessons from the Hive, was a finalist in the non-fiction category in their Cascade Awards ceremony. And, before you ask — no, I did not win. (This is where I would put a sad-faced emoji, if I could.) Although I didn’t REALLY expect to win I was disappointed, but, paradoxically, I was also grateful and honored to be included in the top of the rankings. I later learned it was unusual for a first publication (and a self-published one at that) to even make it to the finalist round. I also learned that being a finalist in this prestigious contest is a “win” in itself.

Frankly, I’m glad there were winners and losers. When everybody gets an award for simply “showing up” it cheapens the honor of being a top contender and it eliminates the standard of excellence. Plus, it’s not how the Kingdom works. Let me explain.

The Kingdom door is open to anyone who wants to cross the threshold. Entering the Kingdom is like winning the lottery and being set for life, but when we get the “check” we’re not done. Walking through the salvation door into our new surroundings is simply the beginning of an adventure of ongoing growth and transformation that continues to the end of our days — and possibly beyond. But it doesn’t happen automatically. We have to work at it. And interestingly, in the end, God has an awards ceremony, too. (Revelation 22:12) After all, He’s clearly told us to run the race well in order to achieve the prize. (1 Corinthians 9:24)

I’ve reviewed the judges evaluations of my book to learn from them. I want to develop my skill as a writer to be the best I can be. After all, I am an ambassador and I want to represent His Kingdom well.

While I didn’t win the contest, I received some good advice and encouragement from editors, publishers and agents, some of whom want to see my next book. To me, that’s progress.

My anxiety at being around so many professionals quickly dissolved the first day of the conference. I soon made new friends at the registration and booksellers tables and before I knew it, I was hanging out with Christ-following sisters and brothers who happened to be amazing writers, editors, publishers and agents.

I am working on my next book with a new determination and a rich reserve, thanks to the OCW. My confidence to step into new things has grown, so it looks like I’ll be attending more conferences in the future.

And, who knows? Next time I may be a winner!